In one of our more unusual and bespoke projects, we have been helping a customer restore an 1899 Belgian made 16 gauge side-by-side hammer shotgun with under-lever Lefaucheux action.

The problem he had was that modern smokeless gunpowder in standard shotgun shells produces much higher pressures, and burns much hotter than old fashioned black powder in the same volumes, mainly because it burns much more efficiently.

The steel strength of an antique gun like this simply can’t handle the pressure of modern smokeless shells. Another problem is that modern shells are much longer than those from 116 years ago and so require a deeper chamber.

The owner was insistent however that the gun must remain exactly original and no machining modifications could be made. The only solution was to restore the shotgun as a muzzle loader – the old fashioned way! 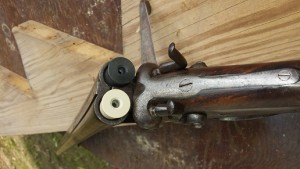 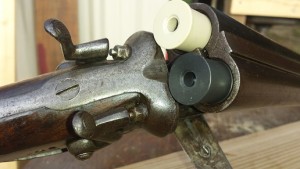 We came up with the idea of replicating the firing end of a cartridge but still have the gun as muzzle loaded. This opened the door for us to design the chamber insert to accommodate regular modern 209 primers which are readily available rather than old fashioned muzzle caps which are in short supply and somewhat fiddly to use.

We were challenged with designing an insert to accommodate all of the above, but also we had the issue of material selection. Temperatures are high but short-lived and pressures are, well, explosive.

In the end we used a standard Victrex PEEK and also a specially modified PEEK grade. These are currently testing side by side to see which performs best. Two months in, we cannot pick between the materials as both are performing perfectly.

Below is a short video of the restored shotgun firing.