We can design and manufacture a range of machined plastic parts & components and recommend the right material for your application.

One of our main strengths is the vast range of fluoropolymer materials we have available. We can even work with you to create a bespoke material that's ideal for your application.

Rotational moulding, also known as rotomoulding, is the production of hollow parts that involves adding a plastic powder to a mould, and then rotating and heating it at the same time. It is a process where no pressure is involved and it can be used to make a huge range of products from traffic cones to wheelie bins, tanks for storing water to kayaks and canoes, playground equipment to water butts. Almost any shape can be produced. 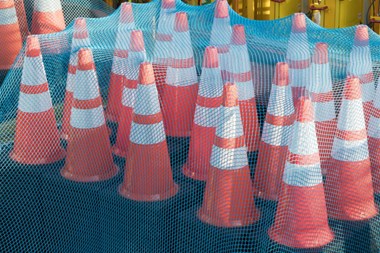 The process of rotational moulding is straightforward. A thermoplastic material (most commonly polyethylene or polypropylene) in powder form is placed in the hollow mould which is normally made from aluminium. The mould is then closed and rotated slowly on two axes whilst being heated. The thermoplastic gradually melts and ‘sticks’ to the inside of the mould. When all the polymer has melted the mould is cooled and the item becomes solid in the shape of the mould. Once cool enough, the mould is removed leaving the formed plastic item.

In order for the powdered polymer to be formed into the shape of the mould, it must melt and reform. During this process, the material becomes extremely ‘sticky’. Whilst this characteristic is essential for forming the new shape, an issue our customers find is that the polymer is difficult to 'demould', particularly when the coating inside the mould begins to deteriorate. Not only does this lead to increased processing time and additional cleaning required, but what typically happens is the ‘sticky’ polymer can leave a deposit on the mould which then ‘burns’ on and builds up over time. This causes more quality issues as well.

Whether it is an OEM mould that requires a coating for the first time, or it's a refurbishment of an older mould, the first thing we do is prepare the surface prior to applying our non-stick release coating.

If we need to remove deposits and existing coatings from the mould, our pyrolysis oven is an extremely effective solution that allows us to remove the unwanted coating whilst leaving the original material with little to no damage.

Finally, we apply our AFC2108 coating, which is non-stick and is designed to release the moulds without sticking or leaving polymer deposits.

Our customers have seen massive improvements to their rotational mould processes. Our newly applied AFC2108 coating has resulted in significant increases in production rates without quality issues and costly downtimes for cleaning.

More about our Release Coatings
Our release coatings can provide outstanding release properties for your mould application; reducing build up, improving Surface Finish and are Low Maintenance & Easy To Clean.
Release Coatings
Call us now on 01992 515880 for more information or send us a message
Get in touch